I picked up the series 4 Apple Watch at the end of September 2018 and now at a few weeks before 6 months with it I wanted to share my longer term testing thoughts.

I picked up the silver aluminium model, 44mm. I was going to treat myself with a stainless steel version but couldn’t justify spending almost double the price. It’s frustrating that Apple force cellular on the stainless now adding to the overall price. To change things up though I went for silver rather than my traditional space grey.

One thing to bear in mind here is that I’m on my second one due to warranty replacement. The issues I had was around heart rate tracking on a workout, it just couldn’t keep it locked. My new one is probably 3 months so not going to be a full view of the durability over the whole time period. Mine has held up well, shows no signs of wear on the body and the screen is scratch free. With the addition of a ceramic back it is also scratch free. I’ve had the original watch and series 2 and they both showed scratches on the back and the screen. In theory the screen is the same glass but in my experience it has held up better.

The immediate thing you notice when trying on your new series 4. If you’re coming from a 42mm I didn’t notice any difference to the way it felt on my wrist but I did notice the increase in screen size in use. You quickly get used to it however and it’s not large enough to force an upgrade from a 42mm series 2 or 3 in my opinion. The new watch faces are ok but I haven’t really settled on them. It also makes the older ones worse, the rounded complications on the bottom don’t sit well with me and I end up having less data than on my series 2. I’m hoping we get a better range of options soon. 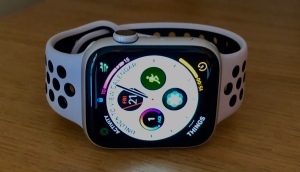 Wow, it’s a fast watch. Massive upgrade from my series 2, which felt laggy almost every time I used it. Having skipped series 3 it was the main reason I upgraded. There’s no lag in anything I’m doing even after 6 months of watchOS. I’m not seeing any need to upgrade this year based on the performance of the processor in the series 4. 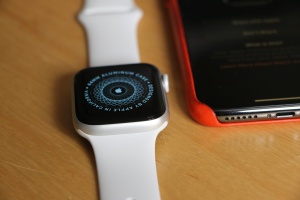 The only new band I have is the white one that came with it. The good news though all of my old 42mm still work so it’s not been an expensive six months for me in terms of picking new ones up.

Is it worth upgrading?

From an original or series 2, yes. From a series 3 then no. I wouldn’t upgrade for the slightly bigger screen but I would for the performance gain, that’s if like me you use your watch every day.

If you are considering an upgrade or even a new purchase then get into a store and try both sizes. I went 44mm so that older bands wouldn’t go to waste and I think the size looks fine on me but with the old 38mm becoming 40mm maybe that would suit you best.

You might also want to shop around a bit as there may now be deals given we are around 6 months from an update and series 5 potentially. (And don’t forget you can trade in your old one directly with Apple).

This site uses Akismet to reduce spam. Learn how your comment data is processed.